Knowledge of wool spinning existed 9,000 years ago and there is evidence to show that twisted cordage made from plant fibres was being used 20,000 years ago but as it isn't known for certain how the latter was produced care has to be taken in saying that the craft of spinning fibre into yarn is as old as that. From 9,000 years ago, however, there are examples of woollen thread in weaving and the spindles used to spin it.

Spinning has been practised by cultures all over the world with only slight differences in spindle styles and technique governed primarily by local materials and the fibre being spun. The use of hand spindles has never died out and is still practised today as a living tradition in many parts of the world besides the growing number of people in our own culture who are taking it up as a relaxing and creative pastime.

You are reading this article on a web site devoted to viking and dark age re-enactment so be advised that there are some anachronisms in this piece but I think they are obvious enough not to be misleading. Due to the ubiquitousness of spinning I have found no value in trying to sift out any elements that may be peculiar to Viking culture alone, if any exist. Authentic, though, to 10th century North Western Europe is the style of spinning described here; 'draft spinning' on low whorl spindles of different sizes to produce woollen yarn.

Draft Spinning relies on the fibres being paid out, or 'drafted' as it is called in the terminology of spinning, from the prepared bunch of fibres, whether this is held in the hand or supported in some other way, straight into the path of the on-coming twist of the developing yarn from the spindle. The individual fibres must be able to slide past one another into the twist where they are trapped firmly into place their ends overlapping along the entire length of the yarn.

In order for this to take place smoothly some initial preparation of the fibres is required prior to spinning, even if this is nothing more than opening up the matted fibres by hand and removing any vegetable matter that may be clinging to it. Some modern spinners prefer to spin fleece just as it is straight from the sheep without prior washing, described as spinning 'in the grease', and with the minimum amount of straightening and teazing in order to retain the character of the wool. This applies especially to the long curly type of fleece like Wensleydale. Preparation, if any at all, is entirely a matter of personal preference.

Assuming you are going to do some preparation, dirty fleece can be soaked for a few hours in plain cold water to lift any loose dirt but leave the natural oils intact. Really hot water and a degreasing agent like a squirt of washing-up-liquid, washing soda, soapwort solution or a specialist scouring agent will strip everything out of the fleece and may leave it uncomfortably dry to handle in which case it may be necessary to add some clean oil. Olive or almond oil rubbed in by hand or an olive oil spray emulsion is available from specialist suppliers.

Next, after washing and drying the fibre it is usual to carry out one of the combing operations to separate the individual fibres and arrange them in parallel alignment ready for spinning. These days there are a variety of different tools to do this job ranging from the rotary drum-carder for bulk production down to small dog-grooming combs that work well for tidying individual locks (called 'staples') of the longwool fleece. Large and small, hand - held and block mounted wool combs are available and these are authentic to the Viking period. Pairs of hand-carders are not authentic as they did not come into use until a little after our period, about the 12th century, but they are very efficient and comfortable to use. A single miniature carder (or wire toothed dog grooming brush) can be used for 'flick carding' longwool staples. 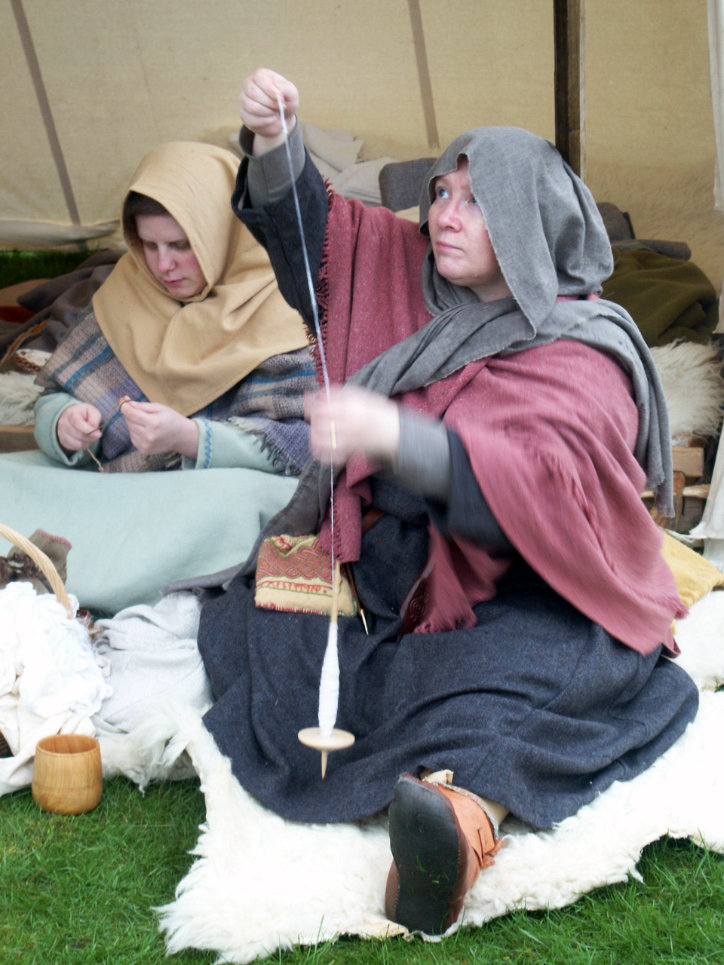 Now you will need to choose a drop-spindle. For our type of spinning a spindle with the whorl (weight) at the bottom of the shaft and a notch at the top the whole thing weighing between 2-4oz will be most suitable to start. There is a theory of whorls that goes something like this:-

A small light spindle weighing 1oz or less is for fine fibres like cotton, silk and some animal hairs and is sometimes used supported in a little bowl or held in the hand so as not to break the thread. This is another technique and not one we will be looking at here.

A 4oz spindle with a 4inch diameter whorl is the sort of thing you would use for thick bulky yarn or for plying, that is twisting together, two or more finer strands of yarn. With a larger diameter whorl spinning is slow and lazy giving a very high bulk open yarn for rug weaving. It is also useful for learning spindle control.

If you are plying on the same spindle you used to spin the single yarns it helps a great deal to make it heavier by slipping a supplementary whorl over the shaft before beginning to ply.

One final consideration to make before taking fibre and spindle in hand and starting to spin is the direction you are going to spin in; clockwise or anticlockwise.

A characteristic of a single strand of spun yarn is the way , once removed from the shaft of the spindle, it twists around itself. There are two ways of dealing with this problem; wet it and hang it under tension to dry or ply it, that is put two (or more) together and allow them to twist around each other. Either way the yarn then becomes stable. The twisting that occurs when two strands are placed side by side is in the opposite direction from the direction in which it was spun so when spinning with the intention of plying it is vital to be consistent in the direction of spin.

Twisting the spindle in a clockwise direction, natural for the right-handed, gives a 'Z' twist to the yarn and anticlockwise spinning gives an 'S' twist. These designations come from the slant of the diagonal line of twist as it spirals along the yarn.

So two 'Z' twist singles will be plyed anticlockwise giving an 'S' twist to the finished yarn. If two of these 'S' twisted doubles are to be plyed it would be in a clockwise direction returning to the original 'Z' twist.

Weaving yarn does not need to be plyed as a rule because it is held under tension on the shuttle and then packed down into the growing weaving and rendered stable when the cloth is finally removed from the loom and washed. Of interest from the point of authenticity is the fact that during the Viking period and into the later middle- ages it seems to have been customary for warp thread to be 'Z' twist and weft to be 'S' twist which would in itself have a stabilizing effect on the single threads.

The Opposite Twist and How to do it

To all the Dark Age living history re-enactors who have just gone "???!!! - So I must now do half my spinning backwards."I say "Don't panic!"

Take your usual low-whorl spindle and sit down. There is another way. By rolling the shaft of the spindle down your thigh, catching it before it falls off your knee, scooping it back up again with your fingers to the top of your thigh, and gently rolling down as before, you will be spinning with the opposite twist from what you get when you drop-and-spin standing up.

This method does require you to manage drafting the fibres with one hand - the one not doing the rolling - but with practice...

Just a point: Most left handers conform to the majority and spin as if right handed, and certainly this saves confusion when working on a group project, but when spinning for yourself do what feels most comfortable.

The theory of whorls also applies to this method of spinning and is something I will return to again in a later article when discussing fibres other than sheeps wool and suitable methods of spinning them. Relevant to low-whorl wool spinning is that very much larger and heavier spindles can be used than would be practical for drop-and-spin. Take for example the 2 foot long Navajo Indian spindle with a whorl the size of a saucer which is still employed in spinning thick wool yarn for their famous rugs and blankets.

Although most identified finds of Norse spindles and spindle whorls are of a size suitable only for drop-and-spin or for both drop-and-spin and thigh rolling, there is some evidence for large spindles in a viking context. Based on a large spindle shaft discovered at the Western Settlement in Greenland, we have made a 2 foot long spindle with a whorl carved from a slice of birch log, the whole thing weighing 14oz. Its purpose - spinning blanket yarn to weave on our warp-weighted loom.