This article is intended as a beginners guide to reliable fire production using flint and steel. It is based on practical experience experimenting with the techniques as part of our living history display.

Any use you make of this article (or any other article on this site) is at your own risk. Flint is sharp, and you are likely to cut yourself. If you succeed in making fire, the chances are that you will sooner or later set fire to yourself. Much can be done to minimise these risks, and good preparation can lessen the damage when an accident occurs, but we can accept no responsibility for your actions.

We must take care to stress that the techniques presented here are merely possible reconstructions. It is probable that there never was "one true method" of using a fire steel, and the materials used for char and tinder would certainly vary from place to place.

Sparks can be produced by striking a piece of steel against a sharp edge on a piece of flint. Each spark is in fact a tiny sliver of burning steel which the flint cuts from the strike-a-light.

At least one spark needs to be caught in a substance usually called char or punk which burns slowly but persistently. This is then placed amongst the tinder and, by gently blowing, the glowing ember in the char can be made hot enough to ignite the tinder.

Flint and other rocks

Having tried a few different pieces of flint, I have found that the darker it is, the better the sparks produced ( No surprise to our friends who re-enact "modern" battles involving flintlock muskets!), although even milky pale grey flint will still produce sufficient sparks to get a fire going - after all, you only need one spark!

I've not really gone into the finer points of flint knapping. Simply breaking a piece of flint by placing it on a hard surface and hitting it with a rock seems to produce pieces with perfectly useable sharp edges. The sharper the edge, the more sparks you will get, but sharp edges flake away and become unusable more quickly than blunt ones. The maximum angle of edge that will still consistently produce sparks varies according to the quality of the flint and of the steel; with the better, darker flints I have found that edges of around 60 degrees are more than sharp enough.

When breaking flint be very careful, wear gloves and safety goggles. You are likely to get a large number of tiny, wickedly sharp shards that can cut your hands to ribbons. Always be careful where you work flint, and make sure you don't leave any sharp pieces where people or animals might accidentally be injured by them.

Flint is not the only rock that can be used to create sparks. Excavations at the viking settlement at L'Anse aux Meadows in northern Newfoundland produced a number of pieces of jasper which had been used as fire starters. Analysis of ten of these pieces showed that five of them came from Iceland, four from Greenland, and one from north-central Newfoundland, approximately 155 miles southeast of the settlement.

The striking face of the strike-a-light must be of high carbon steel. Soft iron and mild steel simply do not work. Modern reproductions are usually solid steel, however, having seen detailed archeological reports on a number of other iron tools, I suspect that the originals would have been forged from a bar of wrought iron with a steel strip welded to one edge.

By their very nature char and tinder are unlikely to be preserved in the archaeological record. Having no solid evidence for any particular set of materials, I have had to rely on "traditional" materials. Perhaps the easiest sort of char to make is char cloth. Simply place a few pieces of linen cloth, about 2 inches square, into a small tin with a tight fitting lid and a small hole in the top. Place the tin on a camp fire and watch carefully for the white smoke issuing from the hole. Don't worry if the smoke catches fire. After a few minutes the smoke should clear; when it does remove the tin from the heat and leave to cool. ( Opening the tin too early will result in the char cloth being ruined.)
Good char cloth is black and, although easily torn, should be flexible and not crumble.
One big problem with this is the lack of suitable burning tins in finds from the period. Although lack of an item does not prove that it didn't exist, it would seem reasonable to expect that some would be preserved alongside the strike-a-lights. We should therefore look for other methods of producing char.
I have come across references to the use of rotten wood in place of the cloth, but have so far failed to make this work. Several sources mention the use of fungal matter. Apparently some forms of fungus (usually found on birch trees) will, when dried, hold a spark; however the samples I have tried have so far been unsuccessful. I have made char from some mushrooms in the same manner as making char cloth, and have found it to work extremely well.

Tinder can be any fine, easily combustible material. Birch bark works well, but can sometimes be a little difficult to ignite. Flax (unspun linen) ignites very easily, although it can burn somewhat too quickly. My personal approach is to use a small nest of flax inside a roll of birch bark, which I find gives a much more reliable two-stage ignition.

Putting it all together

There are several techniques for putting this together. The method I prefer works like this:
First, prepare a roll of birch bark stuffed with shredded birch bark and a small amount of flax. Place this where you can easily get hold of it, and pick up your flint, steel, and char. The flint should be gripped firmly in the left hand (or the right if you are left-handed), with a one-inch square of char cloth on the top surface, positioned so that it comes to the sharp edge of the flint. Take the steel in your other hand and strike down across the edge of the flint.

This should generate a small shower of sparks, and (with luck) one or more of these will land on the char, producing a small, glowing red dot. This usually takes me 3 or 4 tries; I'm sure our ancestors did it first time every time!
Drop the flint and steel into your lap, and stuff the glowing char into the end of the roll of birch bark. 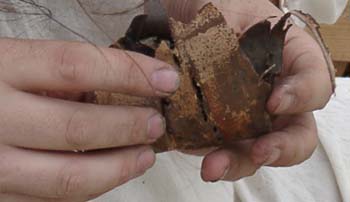 Being careful not to burn yourself, blow gently into the roll of birch bark, and as you see smoke rising from it, begin to blow a little harder. At the first sign of flames, place the roll of bark amongst some fine kindling in your fireplace, and carefully build your fire up in the usual way. 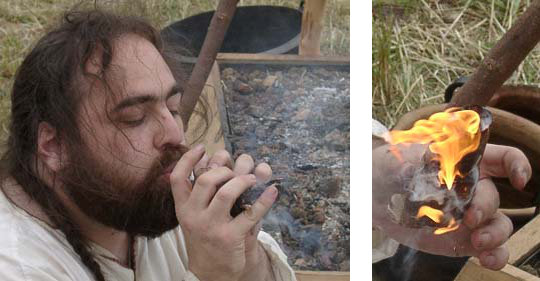 If you select your materials carefully, you should find that with a little practice you can reliably get a fire going in under 2 minutes. The first time I lit an actual fire using these techniques (as opposed to simply producing burning rolls of birch bark as part of a public display) I did so at 6:30 am - and promptly spoiled the authenticity of the moment by putting on a kettle and making coffee. It should be noted that not only was the fire merrily burning in just a few short minutes, but that I did this without first finding another source of coffee. Yes it really is that easy!

A word of warning

Always follow fire safety precautions. In the photographs I am wearing a linen tunic. Do not copy this reckless behaviour. Shortly after the pictures were taken I set fire to it and it suffered severe holes (now patched). Wearing a woollen tunic greatly reduces this risk.